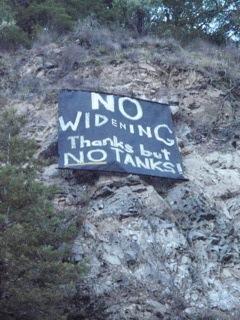 Activists climbed  a cliff today  near Richardson Grove State Park to protest the proposed Caltrans widening project.
The banner reads, "No Widening, Thanks but no Tanks!"

In a letter to the Times Standard Editor, a copy of which was obtained by KMUD News, the activists stated that they "think Caltrans should leave the trees alone in Richardson Grove State Park." The activists are concerned that the forest will be significantly harmed by the road widening project, and stated that "If safety is the issue, why not slow down like between Eureka and Arcata?"

The letter urges that "Respect for the long protected park trees should trump any benefits of the so-called progress this would bring." and warn that "Our quality of life is the only thing that would go down."

The letter also urges the community to come to the Rally at Caltrans, Wabash and Union, Monday, Feb. 7 at Noon.