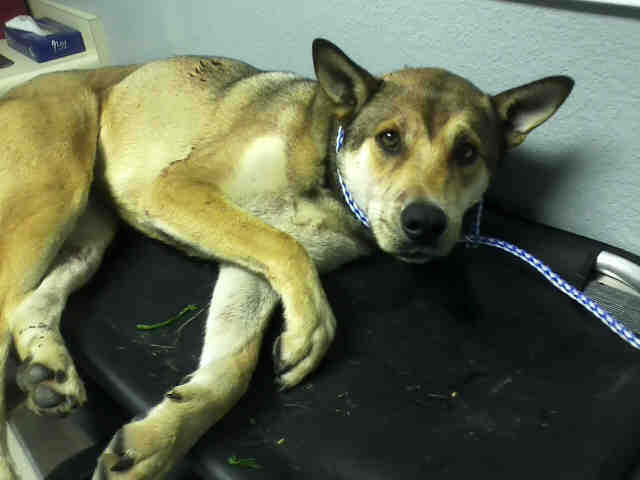 According to a release from the Humboldt County Sheriff’s Office, dated 8/11/11:
On August 9, 2011 at about 1:30 p.m. the Humboldt County Sheriff’s Office Animal Control Division was notified of an injured dog at the gravel pit on Fernbridge Drive near Palmer Blvd. in Fernbridge. When the Animal Control Officer arrived she was met by a County Roads employee who had discovered a young Siberian Husky dog in the bushes. The dog was unable to move. There was fresh dried blood on the dog, and she was covered with ants.

The dog was transported to the vet to be examined. It was later determined that she had sustained two gunshot wounds, one along the right rib cage, and one at the base of her skull. She is currently being treated for her injuries. At this time it is unknown whether she will fully recover.

Anyone having information about this dog is encouraged to contact Officer Brewer, at 445-7251. Donations to help with the care and treatment of the dog can be made to Friends for Life Emergency Medical Fund, P.O. Box 962, Eureka, CA, 95502.