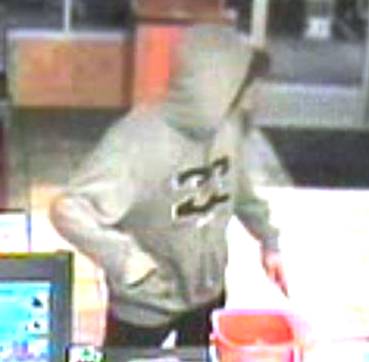 Upon officers arrival, they were told by employees that two suspects had entered the business.  One suspect displayed a handgun, began demanding all the money, while shoving the employee to the ground. The second suspect also was shouting orders and demanding the money. While this was taking place, an additional employee was able to notify police, via the robbery alarm. Both suspects fled with an undisclosed amount of money.

This is an ongoing investigation and further details will be released  as they become available. Anyone with information regarding this investigation is urged to contact Det. Wilcox of the Eureka Police Department’s Criminal Investigations Section at 707-441-4300.

The photos below, sent to KMUD News by the EPD on Dec. 29, 2011, are from a security video and show the suspects’ actions inside the store.