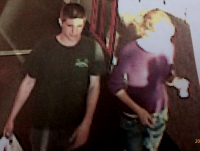 According to information recevied by KMUD News:
In early August a victim’s credit card and other items were stolen during a vehicle burglary in Samoa.  On August 16 the credit card was used by the man in the attached photo at Target in Eureka.  It had also been used at Circle K the same day.
The male suspect appeared to be a white male in his late teens or early 20s, thin, with brown hair.  He was wearing a green short sleeve t-shirt with a white logo, and possibly grey jeans.  He was in the company of a white female, similar age group, with long brown or red hair.  She was wearing a purple long sleeve blouse, and possibly green pants.  Unfortunately, her face is not clearly visible in the photo.
Anyone with information as to the identity of either person is asked to contact PSO Suzie Owsley at 707-441-4325 ext 2#.