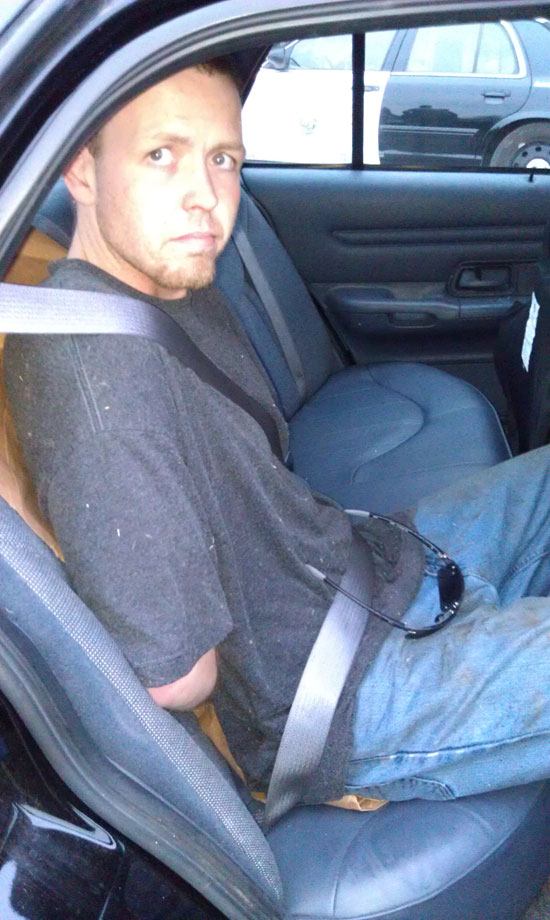 According to a press release from the Eureka Police Department, dated Nov.13, 2011:
On Nov. 13, 2011, at about 2:57 PM, an investigator with the Eureka Police Department’s Problem Oriented Policing Unit (POP) observed a green Jeep Wrangler driving in the vicinity of Allard Av. and Little Fairfield Street.  The investigator attempted to stop the Jeep after he observed the driver, later identified as Ian Michael Treadwell (age 28), commit a traffic infraction.  Treadwell sped away on Little Fairfield Street at a high rate of speed and a pursuit ensued.  The vehicle turned up as recently stolen from the Humboldt State University area.  Additionally, Treadwell was wanted on felony warrants alleging violations of his probation and parole.  Treadwell attempted to evade pursuing officers by driving surface streets south to Herrick Avenue, west to Highway 101, and then southbound on 101.  Marked EPD patrol units joined the pursuit south of Herrick Ave. and CHP was requested to take it over.  The Humboldt County Sheriff’s Office (HCSO) was also notified. Treadwell continued southbound on Highway 101 to the Hookton Road exit at speeds up to approximately 80 MPH. Traffic was light to moderate.  Treadwell then continued on Hookton Road to Table Bluff beach.
In addition to driving at unsafe speeds, Treadwell also repeatedly drove on the wrong side of the road. From the Table Bluff beach parking lot, Treadwell drove off road heading south on the beach in the stolen 4X4 Jeep.  Responding officers were initially unable to follow Treadwell on the beach until a Fish and Game (F&G) Warden in a 4X4 pick-up truck arrived to assist.  A CHP Officer joined the F&G Warden in his vehicle and they drove south on the beach after Treadwell.  Meanwhile, EPD and CHP officers, assisted by HCSO deputies, set-up a large perimeter in the area.  The warden and deputy located the abandoned Jeep further down the beach where the way was blocked by water.  Treadwell was observed swimming across a slough and running into the wildlife/marshland area.  The warden and a CHP Officer pursued Treadwell on foot, crossing multiple patches of water in the process.  Around 3:30 pm, the suspect was located hiding behind a log and was taken into custody without further incident.  Keys that started the stolen Jeep were found on his person.
Due to the multiple water crossings, difficult terrain, and distance from drivable roads, assistance from the US Coast Guard (USCG) was requested.  However, USCG air assets were unavailable and CHP-Redding sent a helicopter to airlift the suspect and arresting officers out of the slough area.   Treadwell was subsequently transported by EPD to the Humboldt County Correctional Facility where he was booked for possession of stolen property, felony reckless evading, and resisting.  The Jeep was driven back to the Table Bluff beach parking lot and released to a towing company at the owner’s request.  The Eureka Police Department would like to extend our appreciation for the invaluable assistance rendered by the California Highway Patrol, Humboldt County Sheriff’s Office, and Fish and Game.
Photo of Ian Michael Treadwell under arrest: