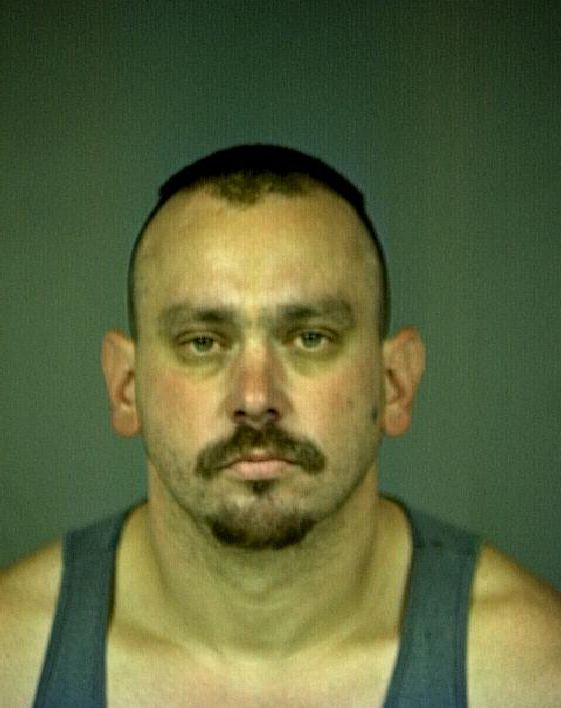 According to a news release fron the Eureka Police Department, dated June 13, 2011:

On June 12, 2011, at about 7:30 PM, a Eureka Police Department patrol officer spotted a suspicious dark blue “ninja” style motorcycle driving in the vicinity of West Del Norte and Pine Streets.  The officer decided to get a closer look at the vehicle.  When the motorcyclist saw the officer turn around behind him, he rolled through a stop sign on northbound California Street at West Del Norte Streets without coming to a complete stop.  The motorcyclist then sped away eastbound on Wabash, reaching estimated speeds of 85-100 MPH.  The officer lost sight of the motorcycle after it turned southbound onto D Street.  Officers were unable to locate the suspect at the time and there was no pursuit involved.

At approximately 8:25 PM, the officer located the motorcycle in an open garage-shop off an alley near L/4th Streets.  The motorcycle had a false out-of-state license plate affixed to it (the plate did not match its VIN).  The officer subsequently detained four people in the garage, including the suspect, Steven Michael Stolberg (36 of Eureka).  Stolberg was on active parole and officers determined the garage had been rented to him. Officers, assisted by the POP Unit, subsequently searched the shop pursuant to Stolberg’s parole conditions.  Inside a secure, locked “safe” room in the garage, officers located a small quantity of methamphetamine, processed marijuana in a hidden safe in the wall, drug use paraphernalia including hypodermic needles, numerous empty drug bindles, and evidence of drug sales activity including a digital gram scale disguised as a music CD case and drug packaging materials.  Additionally, a Patrol sergeant found a sawed off 12-gauge, pistol grip shotgun hidden in the “safe” room.  The shotgun was loaded with 12 gauge slugs.  Officers also found a Canon digital SLR camera with the serial number removed.  The camera’s SD card contained a photo of Stolberg holding the shotgun.

Officers discovered Stolberg’s shop had an active video surveillance system with a monitor set-up in the “safe room” so Stolberg could watch the entrance door and alley outside.  Additionally, the shop was filled with tools and contained motorcycle parts and several motorcycles, some in various stages of disassembly.  The property owner, who lives out of area, has since been contacted and an inspection date is being set due to various electrical/fire hazards discovered in the shop.  It is also anticipated an eviction notice will follow.

Stolberg was arrested and transported to the Humboldt County Correctional Facility where he was booked for parole violation, possession of a controlled substance, maintaining a space for purposes of drug use/sales, unlawful possession of hypodermic needles, reckless driving, felony possession/use of a false license plate with intent to defraud/prejudice, and felony weapons violations (unlawful possession of a firearm and ammunition by a convicted felon, possession of a short-barreled shotgun).  The other three subjects detained were identified and released after they were determined to be uninvolved.