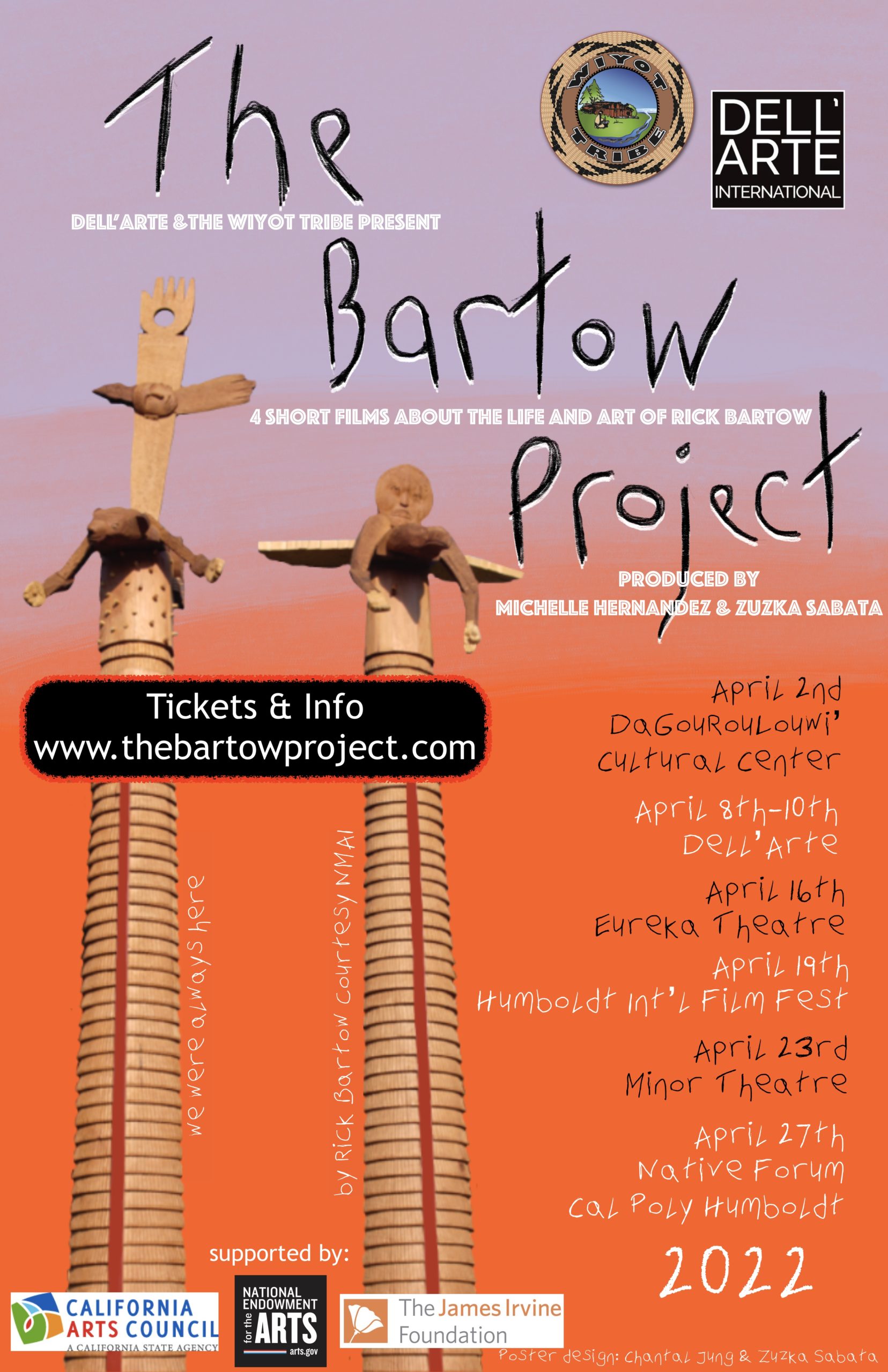 Live streaming May 1st – May 7th

The Bartow Project, a collaboration of Dell’Arte International and the Wiyot Tribe about the life and art of Rick Bartow, will premiere in multiple venues across Wiyot ancestral territory during the month of April 2022. Featuring 4 unique short films presented as a single hour- long program, tickets are on sale now. Please visit www.thebartowproject.com for the full schedule of screenings and ticketing information. The films are appropriate for all ages.

Each film is made by a unique team led by a Native artist and is the culmination of a 3-year partnership between the Wiyot Tribe and theatre company Dell’Arte International to celebrate the life and art of the internationally renowned Wiyot artist Rick Bartow, who passed away in 2016. What began as a proposal funded by the California Arts Council to create a full-length spectacle-based play transformed into a community-engaged film project led by filmmaker Michelle Hernandez (Wiyot) and Dell’Arte company member Zuzka Sabata.

Bartow lived his whole life in Newport, Oregon, the son of white and Wiyot parents. The Wiyot side of the family had emigrated up the coast from their ancestral lands early in the 20th century. Bartow grew up deeply influenced by Native values which he encountered in his family and their relationships with the local Native community of the Siletz Tribe. He thought himself to be descended from Yurok peoples for most of his life but in mid-life he was re-assigned by the Bureau of Indian Affairs to the Wiyot Tribe and began a process of reconnection. In 2012 he invited Wiyot dancers to Washington, DC for the installation of his pole sculptures “We Were Always Here” in front of the Smithsonian’s National Museum of the American Indian. The project’s Co-Artistic Director Michelle Hernandez refers to Bartow as “Uncle Rick” since her family forged a close connection with him following that event in Washington DC. 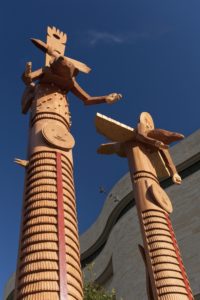 Concurrent with the film screenings are several local exhibits of Rick Bartow’s art presented in collaboration with CalPoly Humboldt’s Goudi’ni Native American Arts Gallery, curated by Gallery Director Brittany Britton (Hupa) with the support of Portland’s Froelick Gallery which represented Bartow for the bulk of his career.  A small exhibit will be featured at the Da Gou Rou Louwi’ Cultural Center in Old Town, Eureka, newly opened by the Wiyot Tribe. This exhibit will open to the public 6p-7p on Arts Alive Saturday April 2nd just before the first Gala screening of The Bartow Project and remain accessible to the public during business hours for 6 months. A limited number of tickets will be sold to the Gala event, please see the website for further info: www.thebartowproject.com

A larger exhibit will be held at the Goudi’ni Native American Arts Gallery with artwork borrowed from the Froelick Gallery as well as unique local pieces held in private collections and ephemera and information describing the process of the project. Please see the gallery website at https://art.humboldt.edu/goudini-native-american-arts-gallery for more information and gallery hours. This exhibit will run from March 24th, 2022 to May 28th, 2022.

The Bartow Project films will also be available online from May 1st to May 7th, ticketing information coming soon, and will be featured in Dell’Arte International’s 2022 Baduwa’t Festival in July. 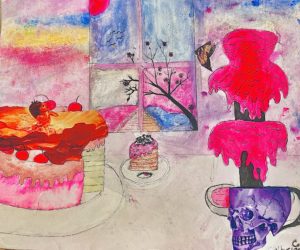