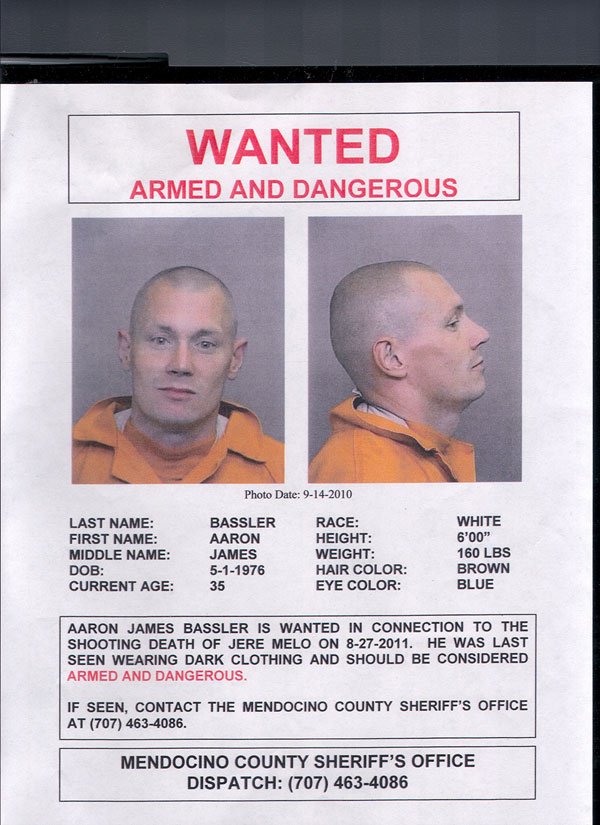 According to a Mendocino County Sheriff’s Office Press Release, dated August 27, 2011:
On August 27, 2011 at approximately 10:22 AM the Mendocino County Sheriffs Office was contacted regarding a shooting incident, which took place approximately four miles east of Fort Bragg, CA in an area on private timber company adjacent the Noyo River. This property is in remote and rugged terrain. The property is also adjacent to the Skunk Rail-road lines. Mendocino County Sheriffs Deputies along with Fort Bragg Police Personnel, California Highway Patrol and Fish and Game Officers proceeded to the area and contacted a witness to the shooting. The independent witness in the shooting advised law enforcement personnel that they were conducting property management in the area and the suspected gunman started shooting at them. The witness was able to flee the area and contact law enforcement via cellular telephone. The counties SWAT Team has, at the time of this press release, been deployed to this rural and rugged area, in an attempt to locate any victim or suspect related to this shooting.

At the time of this press release the suspect had been positively identified as Aaron Bassler a transient from Fort Bragg, CA. A reverse 911 was sent out to residents in the general area of the incident. Once the suspect is in custody, a second reverse 911 will be sent notifying residents that the area is secured.  Anyone with information about Bassler’s whereabouts is encouraged to contact the Mendocino County Sheriff’s Office at (707) 463-4086 or (707) 467-9159, or by e-mail at [email protected]

Below is a photo of wanted murder suspect, Aaron Bassler:

Related to the press release above, an article in the SF Gate (on-line version of the San Francisco Chronicle)- Mon. August 29, 201 reported that:
According to Fort Bragg Mayor Dave Turner, the victim was Jere Melo, a longtime forester who served as mayor from 2000 to 2004. Melo worked for Campbell Timber Management and was with a co-worker investigating a report of a transient when they discovered a man living and growing marijuana on the property. The SF Gate article also reported that according to the Sheriff’s Office the suspect, Aaron Bassler, is a transient from Fort Bragg who is 34 or 35 years old and has a long history of run-ins with law enforcement and that officials said he should be considered armed and dangerous. Earlier this year, Bassler was pepper sprayed, shocked with a Taser and arrested after crashing a truck into a Fort Bragg middle school tennis court, according to an article in the Fort Bragg Advocate-News. In 2009, Bassler faced federal charges after allegedly throwing packages into the Chinese Consulate in San Francisco on four occasions, bringing out a bomb squad each time. The packages contained drawings of red stars and writings that referred to the "Martian military" and Chinese weapons designs, investigators said. Bassler completed a pretrial diversion program and the charges were dropped, records show.

The Fort Bragg City Council Webpage includes the following information about Jere Melo:
Councilmember Jere Melo was first elected in 1996, after serving a 4-years term on the Planning Commission. He served as Mayor Pro Tempore in 1998 – 2000, and he served as Mayor, 2000 – 2004. His regional duties include service as a board member on the Mendocino Local Agency Formation Commission (12 years), Fort Bragg Fire Protection Authority (8 years), and as the Chair of the Coastal Cities Issues Group for the League of California Cities. Councilmember Melo also previously served on the League of California Cities Board of Directors.

Councilmember Melo has lived in or near Fort Bragg since 1966, when he began working for the Union Lumber Company as a forester. He was raised in the City of Mt. Shasta, and he attended the University of California at Davis and Berkeley, receiving a Bachelor of Science in Forestry in February, 1964. He received a commission in the U.S. Army upon graduation from Berkeley and served in South Korea and in NORAD on the continent. Upon his employment with Union Lumber, the Army assigned him as Company Commander to the local Army Reserve unit, and he served six years in the reserves.

The photo below shows Jere Melo: