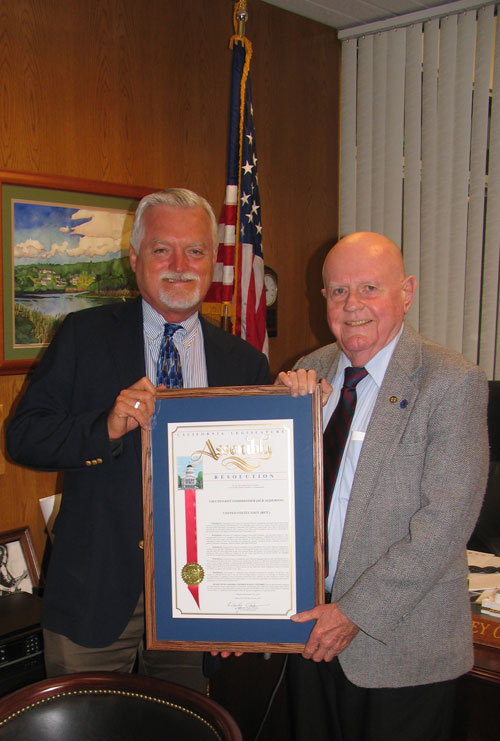 According to infromation released from Assemblymember Wesley Chesbro’s Office, dated June 22, 2011:
Assemblymember Wesley Chesbro (D-North Coast) today honored U.S. Navy (Ret.) Lt. Cmdr. Jack Alderson of Fortuna as the First Assembly District’s 2011 Veteran of the Year.
“It is my pleasure to give this recognition to Jack, who served his country for 21 years in the Navy and when he retired devoted his life to public service in port and harbor management,” Chesbro said. “Jack has such tremendous energy, remaining actively involved as an advocate for veterans and serving in the California Senior Legislature to this day.”

Alderson’s service in the U.S. Navy included an assignment to the Persian Gulf region, where he was an advisor to the Imperial Iranian Navy in the early 1960s. Alderson was one of just three enlisted men and the senior American office on the river between Basra and Kuwait during the “Kuwait Emergency” in 1961 when Iraq threatened to occupy Kuwait the first time. Alderson also served as Officer in Charge of the 5th Army Tug Division during Project SHAD – a highly secretive series of Cold War era tests the Department of Defense conducted in the 1960s, often without the knowledge of servicemen, to identify the vulnerabilities of U.S. warships to attacks with biological or chemical warfare agents. In recent years Alderson has been deeply involved in an effort to get elements of Project SHAD declassified so that veterans involved in the tests who are now suffering from health problems can get the care they need.

After his Navy service, Alderson embarked on a civilian career as a harbor master and ports manager. He served as CEO of the Humboldt Bay Harbor, Recreation and Conservation District for 22 years, retiring in 1996. Alderson was twice appointed by the governor to serve on the California Boating and Waterways Commission and was elected its chairman twice. He is a past president of the Harbor Masters Association and was twice selected by his peers as California Harbor Master of the Year.

After his retirement, the major port districts of California awarded Alderson a first-ever lifetime achievement award. Alderson has kept busy serving in the California Senior Legislature – a nonpartisan organization made up of 120 elected members to represent seniors, which holds model legislative sessions at the Capitol every year. “One of the things that makes our country great is that we have outstanding individuals who are willing to step forward when they are called upon to serve their country and put themselves at risk in order to make the world a better place and protect our freedoms,” Chesbro said. “So I think it’s fitting that the Legislature recognizes outstanding veterans, both for their careers in the service but also their public service after having left the military.” Chesbro prepared an Assembly Resolution and Certificate, which he presented to Alderson on the Assembly Floor, and joined the honoree at a luncheon for veterans at the Sacramento Convention Center across from the Capitol on Wednesday.