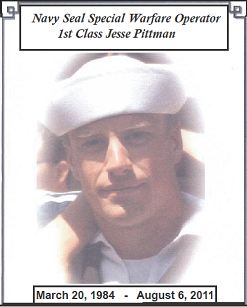 According to News Releases from both the Mendocino County Sheriff’s Office and CAL FIRE:

The memorial service honoring Jesse D. Pittman is scheduled for Saturday September 24, 2011 at the Redwood Empire Fair grounds in Ukiah beginning at 11:00am. Jesse was one of 30 U.S. servicemen killed August 6, 2011 in Wardak Province, Afghanistan.  Jesse was a 2002 Willits High School graduate joining the Navy in March 2005 and becoming a Navy SEAL in April 2007. The extended family and friends of Jesse Pittman ask the community of Mendocino County and beyond to come out and show their support for the sacrifice made by Jesse and his family by lining the streets of Ukiah as the family is escorted to the fairgrounds for the service.
The procession is scheduled to travel from U.S. Highway 101 to the Perkins Street exit; head west to State Street turn north and travel to the fairgrounds. The approximate time the procession should exit the freeway will be between 10:00am and 10:15am on Saturday September 24, 2011.  Please bring a small American Flag if possible and pick a location on the designated route to help do your small part to let Jesses family know that we all care and send deepest condolences their way at this time of tremendous loss.
For those who would like to make a donation to help with this memorial honoring our local Fallen Hero Jesse, please send your donation to:
Agape Bible Church, 290 S. Lenore,Willits, CA  95490: C/O Jesse Pittman Fund
Click here to see the original KMUD News post of this story.
Jesse D. Pittman: