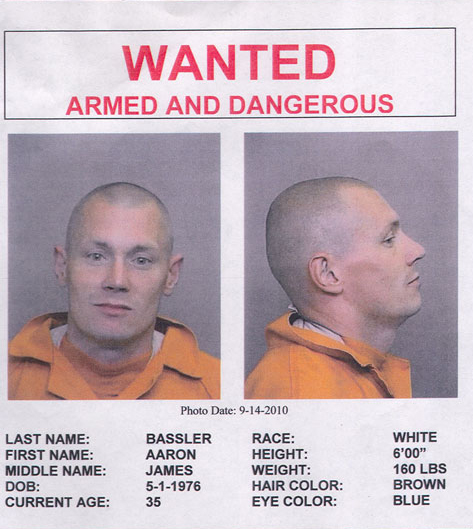 According to articles in the Ukiah Daily Journal and other news sources:
Saturday evening, October 1, 2011, Mendocino County Sheriff Tom Allman confirmed that murder suspect Aaron Bassler had been shot and killed on Saturday at 12:23 p.m. by members of a Sacramento SWAT team helping in the search for Bassler. Aaron Bassler had been charged with shooting and killing Fort Bragg City Councilman Jere Melo and Land Conservancy worker Matt Coleman and had eluded law enforcement efforts to capture him for 36 days.
Bassler was shot as he walked down a logging road six miles outside Fort Bragg, one-half mile south of Mud Springs near Sherwood Road, less than two miles from his mother’s home. According to an on-line post in the Ukiah Daily Journal, dated Oct. 1, "The SWAT team saw Bassler from a hidden area about 25 feet above him and at about 40 yards, positively identified him and opened fire. Bassler was hit in the upper torso with all seven of the shots fired from the team’s Colt M-4 .223 caliber weapons. Allman said he did not know if all three SWAT team members fired, but at least two did. Allman said as he was hit, Bassler raised his gun – the same gun he has been carrying throughout the search – but fell to the ground almost immediately. The Sacramento team, one sergeant and two deputies, approached him, knew he was dead and alerted the command center."
Read more in the following news sources:
Ukiah Daily Journal
Times-Standard
CNN.com
Murder suspect, Aaron Bassler, was shot and killed by law enfrocement officers on Saturday, October 1, 2011: