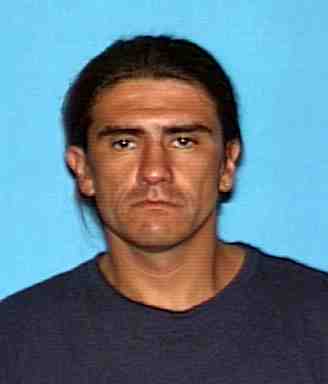 According to a press release from the Humboldt County Sheriff’s Office, dated July 12, 2011:
On 07-11-2011, approximately 10:00 p.m. Humboldt County Sheriff Deputies and Hoopa Tribal Police received information that Bruce Jason Hunsucker also known as Bruce Stallings-Hunsucker was at a residence off Pine Creek Road in Hoopa.  Deputies and Hoopa Tribal Police Officers staked out the residence and saw a vehicle about to leave. A deputy, who was on foot, watching the residence attempted to stop the vehicle, however the vehicle left at a high rate of speed. The deputy was able to look inside the vehicle as it left the driveway and confirmed it was wanted murder suspect Bruce Hunsucker. Tribal Police pursued the vehicle, however lost sight of it near Pine Creek Road and Dowd Road, Hoopa. Bruce Hunsucker has an active arrest warrant for the murder of Darrell Hanger Sr., 50 years of Willow Creek on May 5, 2011.

Anyone with information regarding this case or the whereabouts of Bruce Stallings-Hunsucker is requested to contact the Sheriffs Office immediately at 445-7251.