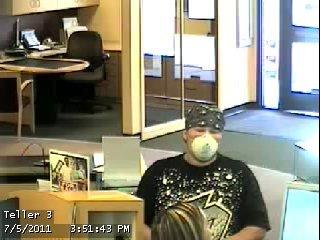 According to information released by the Humboldt County Sheriff’s Office:

An armed robbery took place at the Chetco Federal Credit Union in Grants Pass, Oregon on July 5, 2011, and then a subsequent robbery occured at the Chetco Federal Credit Union in Smith River on July 8th, 2011. In both of these robberies the suspect and style of robbery has similarities to the McKinleyville Coast Central robbery which occurred on August 12, 2011.
Anyone with information regarding this case is requested to contact Sergeant Wayne Hanson at 707-268-3639, or the Federal Bureau of Investigation at 707-725-6141.
Photos from the Grant’s Pass robbery on July 5, 2011