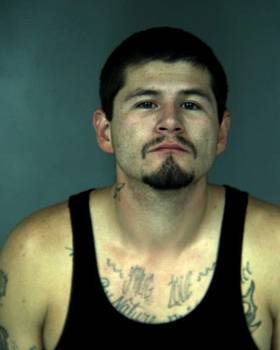 According to a press release from the Eureka Police Department, dated March 7, 2012:
On March 15, 2012 EPD Officers responded to the intersection of Hodgson and “G” streets after a stolen Honda Civic collided with a parked car. The driver of the Honda fled from CHP officers at high speeds near the Eureka Zoo. CHP discontinued pursuit for safety reasons. A short time later the Honda crashed into an occupied parked car on “G” street just south of Hodgson. The unknown driver and solo occupant fled the scene and was not located. Several items of evidence, including a cell phone were recovered from the vehicle. A forensic analysis of the cell phone was conducted. Evidence gathered revealed that Arlen Troy Brown DOB 5-23-83 is a person of interest in the case. Officers are wishing to speak with Brown but his whereabouts are unknown.  Brown is currently on active felony supervised county parole. According to Brown’s supervising agent, Brown is wanted on a felony warrant for absconding. Anyone with information is encouraged to contact Senior Traffic Officer Gary Whitmer at 441-4232 or the Detectives of the Eureka Problem Oriented Police Unit at 441-4373.