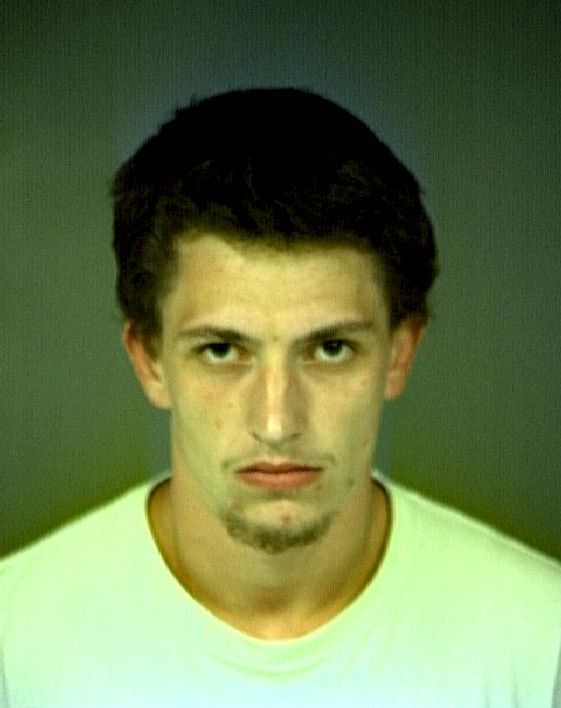 According to a News Release from the Eureka Police Department, dated June 23, 2011:
On the morning of June 23, 2011, Detectives with the Eureka Police Department’s Problem Oriented Policing Unit (POP) were conducting surveillance on a residence on the 3300 block of I Street, Eureka.  The property had been the source of recent neighborhood complaints concerning suspected marijuana cultivation occurring there.  Earlier, Detectives had also observed several mature marijuana plants growing in the backyard and POP was in the process of obtaining a search warrant for the residence.

At about 11:00 AM, Detectives observed two males exit the residence and drive off southbound on I Street in a silver VW Corrada hatchback sedan.  Detectives conducted a traffic stop on the vehicle at Manzanita and ‘I’ Streets.  The occupants, Andrew Micheal Harmon (21 of Eureka) and Paul Lojan Harig (20 of Eureka), were taken into custody on suspicion of marijuana cultivation.  A small quantity of processed marijuana was found on Harmon’s (the driver) person.  During a subsequent search of the vehicle, Detectives found a duffel bag containing approximately 4.75 pounds of processed marijuana.

At approximately 12:15 PM, Detectives served the search warrant on the residence.  Investigators subsequently located 49 growing marijuana plants in the backyard, including clones and mature plants.  The plants were in soil pots and ranged in height from approximately 2” – 4’.  21 more growing marijuana plants (small clones) were found in the garage along with 13 drying marijuana plants hanging from a cable (6 pounds of drying marijuana).  Three bags containing approximately 2.25 more pounds of processed marijuana were located inside the residence, along with approximately 1 ounce of concentrated cannabis powder (“kief” – the resin glands or trichomes of cannabis) and several grams of suspected hash oil. Investigators also found two digital gram scales, marijuana packaging materials (turkey size oven bags etc.), and evidence of an illegal hash oil manufacturing lab (glassware with hash oil residue, empty butane gas cartridge box, and two residue laden capped PVC pipes).  These items were used to make concentrated cannabis through a highly volatile chemical extraction process.  Additionally, Investigators discovered written records strongly indicative of marijuana sales activity.
Officials with the City of Eureka’s Community Development, Building, and Fire Departments were called to the scene to inspect the residence for code enforcement violations and safety hazards.  The grow was determined to be outside the provisions of Eureka’s Medical Cannabis Ordinance, which may result in additional fines being levied on the property owners and/or tenants.

Harmon and Harig both claimed Prop 215 medical marijuana exemptions for their grow. However, these were invalidated due to the clear evidence of illegal marijuana sales, hash oil manufacturing, and City ordinance violations that were uncovered.  Harmon and Harig were transported to the Humboldt County Correctional Facility where they were both booked for manufacturing a controlled substance by chemical extraction, possession of marijuana for sale, transportation of marijuana, and unauthorized cultivation of marijuana (all felony offenses).  Additionally, Harig was on summary probation for threatening/obstructing a federal officer and he was being held for a related SWAP (Sheriff’s Work Alternative Program) violation.