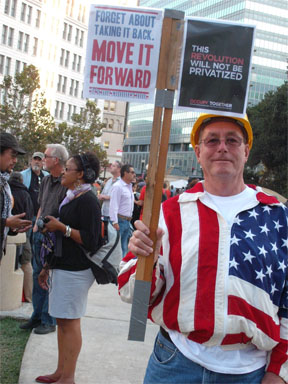 The current question within the movement is: will it strengthen the movement to broaden out the protests to include other progressive causes like protection of the environment and civil rights, or will that serve to dilute the movement by taking the focus off of the broad-base appeal issues of unemployment and

The photos to the right from Occupy Oakland – compliments of Sheila Dawn Tracy.

The first article, having the headline: "Occupy Wall Street embraces environmentalists",  appeared in the Kansas City Star and was posted Oct. 24, 2011 by Russell McLendon, an eco-journalist. In this article McLendon writes, "And while the nebulous campaign is focused mainly on economic issues, it has also strived for inclusiveness, winning the support of diverse groups ranging from teachers and college students to nurses, bus drivers and construction workers. When its momentum coalesced into the recent Occupy Wall Street March, it included some 5,000 people, many of them from organized labor. But the march also was buoyed by another group of rabble-rousing upstarts: environmentalists. Fresh off their own nonviolent stand outside the White House – where they spent two weeks protesting the proposed Keystone XL oil pipeline – the re-energized U.S. environmental movement has now found an even bigger, broader stage. And like most factions of Occupy Wall Street, it seems perfectly happy to share that stage with other interests." read more…

A second article by Dave Burris, and found in the on-line publication "Town Square Delaware", suggests that the Occupy Movement stay focused on Wall Street reform. Burris writes: "From extremists like the socialists and anarchists, to more mainstream lefty groups like Bill McKibben’s call to align the Keystone XL opposition with the OWS movement, everyone wants a piece of the energy created by the protests. Don’t let them. Stick to Wall Street, where the reform is needed most." read more…
The Occupy Wall Street Movement began on September 17, 2011 and has now spread worldwide. You can watch video streams of the worldwide movement at the website: occupystream.com.
Locally, at this point, we have at least three movements in our county:

"Americans from all walks of life are looking for a fair shake. When the financial system needed our help, Wall Street was bailed out. The problem is Main Street needs help too. The best way to get our economy going is to ut Americans back to work fixing our schools, roads, and bridges. That’s why job creation is my number one priority.We need to focus on getting Americans back to work, getting our fiscal house in order with fair and balanced solutions, and making sure Medicare and Social Security are guaranteed for today’s seniors and for generations to come. The commitment the Occupiers have shown in giving a voice to the struggles that millions of everyday Americans are going through is the kind of commitment the House Majority needs to show in helping middle class families. It is time Washington started working across the aisle on common-sense solutions that will get America working again."

The photos below, from Occupy Mendo, are compliments of Sheila Dawn Tracy and are part of a set called "Facing a Movement."