KMUD News reported on 10/29/2009 that Mr. Cushman's pickup truck and his remains have been found.

Here's an article in the October 30, 2009 edition of the Eureka Times-Standard:

Human remains found in Trinity County last week were identified as a missing Garberville man on Wednesday and his death appears to be a suicide.

scroll down to see photo of Sam Cushman

Humboldt County Sheriff's Office is looking for a Garberville man who has been missing after unexpectedly dropping off his child at his ex-girlfriend's house and disappearing. On May 3, 2009. Sam Dunlea Cushman's ex-girlfriend reported that she had not seen nor heard from Sam since he dropped off their child on April 28. The woman added that Sam had not returned her phone calls or e-mails and that was unusual for Sam. She said on April 29 she had received a telephone call from a friend of Sam's who told her he had seen Sam that day. He told her Sam had been acting strangely and he was concerned about Sam. That was last time Sam has been seen.

Sheriff's Deputies checked Mr. Cushman's house and found many of his personal items still at the house. Further investigation revealed that Mr. Cushman may be struggling with some personal problems and he has a history of drug use and depression. Mr. Cushman is considered an "at-risk" missing person.

Mr. Cushman drives a 1998 green camouflage Toyota Tacoma, California license plate 8S71716. Mr. Cushman is known to travel to Mendocino County via Bell Springs Road. He is 36 years old, 6 feet tall, and 145 pounds. He has brown hair and green eyes. He has several tattoos including a lion's head on is back. Anyone with any information regarding the whereabouts of Sam Cushman should call the Humboldt County Sheriff's Office at (707) 445-7251. 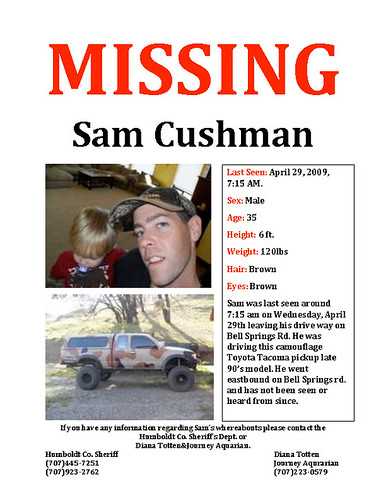