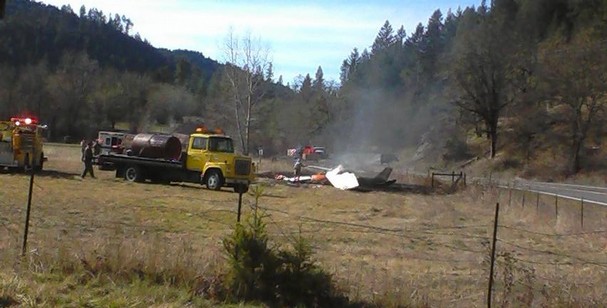 When deputies arrived they learned the plane was a Cessna Model 172 E, built in 1963. The plane crashed as it was landing, and is reported to possibly have stalled. Two Cal-Trans workers were working on Highway 36, and heard and saw the crash. They rushed to aid the injured pilot and passenger. They assisted with removing both victims from the plane before it caught fire and burned. The plane was piloted by a 65 year old male flight instructor from Garberville when it crashed.  The other victim was a 30 year old male student pilot from Redway. The 65 year instructor was flown to Redding Mercy Hospital for treatment for broken bones. The student pilot received only minor injuries.

Information aired in the Feb. 3, 2012 KMUD Newscast of this incident, Cynthia Elkins reporting, includes the following:
"Two Southern Humboldt men are reportedly injured, but survived a plane crash while landing at the Dinsmore airstrip this Friday afternoon … and two highway workers are being credited with saving their lives.  According to the Humboldt County Sheriff’s office, a 65-year-old Garberville flight instructor was seriously injured in the crash.  Local pilot Richard Weber confirmed with us this afternoon that it was indeed Dennis Lichty, a local flight instructor who is a frequent guest on KMUD’s talk show with pilots.  A 30-year old student pilot from Redway reportedly walked away with only minor injuries.  Police say the plane hit nose down and burst into flames shortly thereafter.  Lieutenant Steve Knight is a spokesperson with the Humboldt County Sheriff’s office."

"Again, local pilot Richard Weber told KMUD news this afternoon that the pilot who was seriously injured in the crash is Dennis Lichty, someone you hear regularly here on KMUD’s Pilot’s Lounge show. Richard tells us that he has heard that Dennis did suffer some pretty serious injuries but says he will be okay.  We’ll keep you updated with any additional news we learn."

The photo below shows the crash site. Photo is by Lyle Johnson as it appears in Record Searchlight