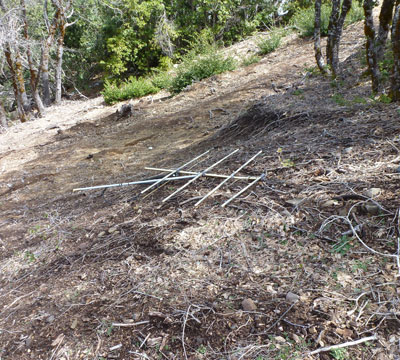 Storms on April 11 are the cause of signal impairment for Redwood Community Radio’s KLAI (90.3 FM). Update May 3, 2017On Tuesday, May 2nd professional climbers from Six Rivers Communications in Eureka installed a signal antenna to restore service to much of the area served by the original antenna array. Due to the nature of the temporary antenna the signal is not quite as strong and will not reach as far as before the damage occurred. We are working with our consulting engineer on a permanent replacement that will restore full service, and will last for years to come. Update 4/28/2017We’re looking at Tuesday, May 2 to mount a temporary antenna. Weather forecast looks good, and highway 101 should be open by then. Update 4/26/2017Highway 101 is closed again, so a repair crew won’t be able to get to the transmitter site. Replacing the antenna is a high priority, and may happen as soon as the highway opens, except on the weekend, due to increased (overtime) cost for the tower climbers. We’re hoping for Friday or Monday.Update 4/24/2017
Depending on road and weather conditions a temporary antenna will be installed on Thursday, April 27. The signal will not be as strong as with the original antenna array, but at least there will be a signal. Strong winds had broken off one antenna completely, and severely damaged a second one, making it non-functional. The antennas were part of a three antenna array that serves Northern Mendocino and parts of Southern Humboldt county. They’re installed on a tower high atop Cahto Peak west of Laytonville. KLAI is a repeater for KMUD, the non-commercial station licensed to Garberville. KMUD started broadcasting in 1987, and KLAI started as a low power translator, financed and installed largely by volunteers in the early 1990s. The installation also transmits Radio Bilingue, a non-commercial radio network based in Fresno, California, on their station KVUH, 88.5 FM. The two radio stations share equipment and an antenna array. Radio Bilingue has programs in Spanish and English, music and news. The two organizations jointly installed the equipment in 2006, at the same time increasing the KLAI signal to 500 watts, and KVUH to 1,000 watts. KMUD provides daily local and regional news at 6 pm, and call-in talk shows six days a week and a vast range of music. Community support is critical to keep both stations on the air.  The stations will be reinstalling antennas as soon as possible. It may take several weeks for equipment to arrive and for the weather to be sunny and calm enough for tower climbers to complete their work.

For more information see https://kmud.org and http://radiobilingue.org. Both stations also broadcast on the internet. Top photo: Antenna broke and fell to the ground.
Middle photo: Tower site on April 15, 2017
Bottom photo: Tower on September 15, 2014You can see more photos of the tower and the damaged antennas here.