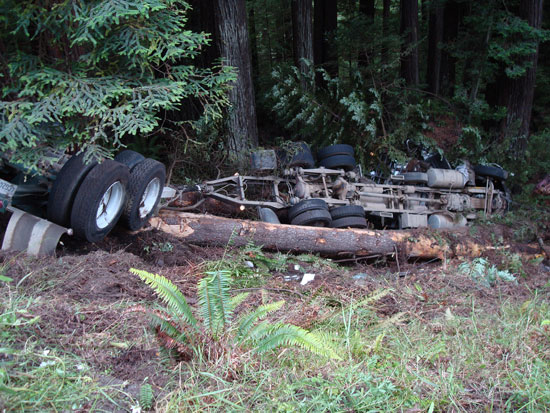 According to a news release from the California Highway Patrol, dated August 29, 2011:

On August 29, 2011, at approx. at 09:30 AM, Bruno Albiani, age 61, of Fortuna was driving a 1991 Freightliner tractor and trailer,loaded with logs, westbound on Freshwater Road appoximately 1.5 miles east of Freshwater Park.  Mr. Albiani was reportedly traveling at an unsafe speed while negotiating a right hand curve in the roadway on a steep downhill grade.  Mr. Albiani’s vehicle crossed the eastbound lane and traveled over the embankment on the south side of the road.   Mr. Albiani’s vehicle then rolled over onto its left side and came to rest approx. 80 feet over the embankment.
Emergency personnel from Eureka Fire Department, Kneeland Volunteer Fire Department, City Ambulance, Humboldt County Road Department, Cal-Fire and the California Highway Patrol responded to the scene.  Mr. Albiani was freed from his vehicle and transported to Saint Joseph’s Hospital in Eureka. This collision is still under investigation, and the CHP release reports that impairment is not a factor in this collision.