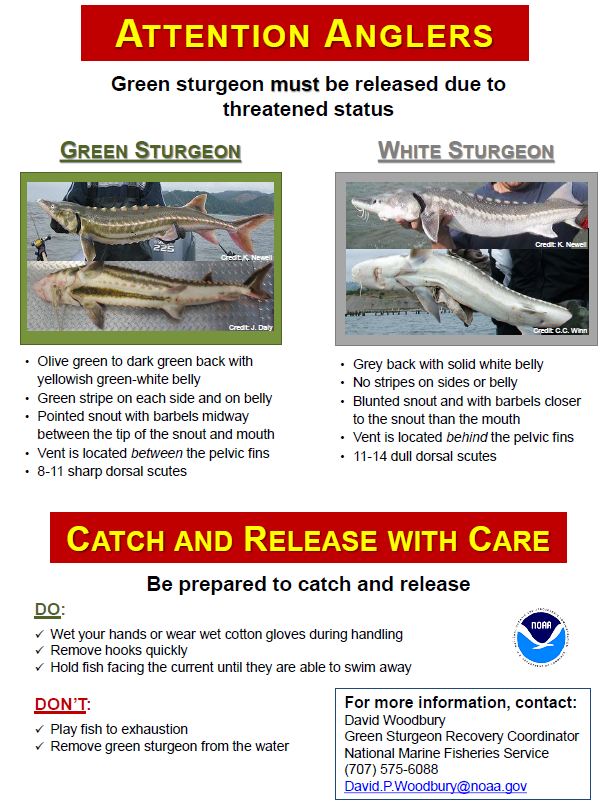 According to a Press Release from the Humboldt County District Attorney’s Office, dated 9/15/11:

In April 2006, the green sturgeon was listed under the Endangered Species Act (ESA) as a threatened species and retention of any green sturgeon caught in state waters was prohibited by California law in 2006.  The ESA take prohibitions took effect in July 2010. According to NOAA Fisheries, Southern DPS green sturgeon numbers have been dramatically declining during the past ten years, and it is estimated that fewer than 1,000 individuals remain. Green sturgeon can reach 7 feet (210 cm) in length and weigh up to 350 pounds (159 kg). The largest green sturgeon have been aged at 42 years, but this is probably an underestimate, and maximum ages of 60 to 70 years or more are likely.
In September 2010, Vernon Steeves of McKinleyville and Larry Swingseth of Eureka unlawfully took a Southern Distinct Population Segment (sDPS) green sturgeon from Humboldt Bay. This case was investigated by NOAA’s Office of Law Enforcement and on August 25, 2011, Steeves and Swingseth, pled no contest to the capture and killing of a federally and state protected green sturgeon. “This case clearly illustrates why it is so important for sportsmen to know how to identify species,” noted prosecuting Deputy District Attorney Christa McKimmy. “Fishermen are ultimately responsible for knowing applicable fishing regulations and I highly recommend they check with California Fish and Game or the local NOAA Fisheries office before leaving on a fishing trip,” added Special Agent David Reilly with NOAA’s Office of Law Enforcement. “When in doubt, ask.”
Both Steeves and Swingseth received $685 fines and one year of probation.