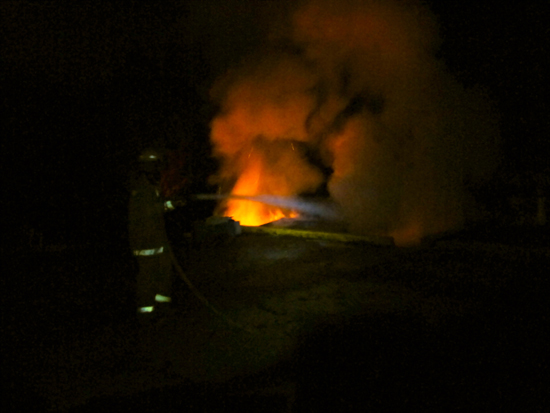 Important update on this story:
According to KMUD News:
As of 5pm today, Thurs, Feb. 9, 2012, the Briceland-Thorn Road was reopened upon pronouncement by an official of the Eureka Fire Department, who had evaluated the scene, that the fire was no longer a hazardous material situation.

According to KMUD News:
A fire that started on Wednesday, February 8, 2012 caught fire for the third time today in the storage container used for the Whitethorn Dump and Transfer Station. The cause of the fire is unknown at this time, but has led fire officials to believe that it may be an environmental hazard. CAL FIRE, Whitethorn, and Briceland Volunteer Fire Departments were among those responding to the incident. Equipment dispatched to the scene included: one CAL FIRE engine, and two Whitethorn engines. CHP, the Sheriff’s Dept., and Humboldt County Environmental Health were notified.

As of early this afternoon the Briceland-Thorn Road has been closed to traffic from the junction to the Whitethorn CAL FIRE station. This is about a 1/2 mile of the Briceland Thorn Road. Neighbors close to the dump were told to “Shelter in Place” – that means they were told to stay in their homes as the air outside might be dangerous to breathe.   School bus service to Whitethorn was cancelled. Parents were advised to arrange pickup or carpool for their children, and Chemise Mountain Road was used as an alternate route. As of this afternoon, (Thurs. Feb. 2, 2012) the controlled fire was being monitored and considered dangerous as the contents of the fire are unknown. They are waiting for an expert to come from the Eureka Fire Dept. to assess the fire.

The photo below by Mikal Jakubal shows Telegraph Ridge VFD firefighter Will Rogers at the Whitethorn Dump Fire:

Posted in Breaking News
← Change is in the air at Redwood Community Radio. Literally.Governor Brown signs SB 81 to restore funding for Home to School Transportation Program →