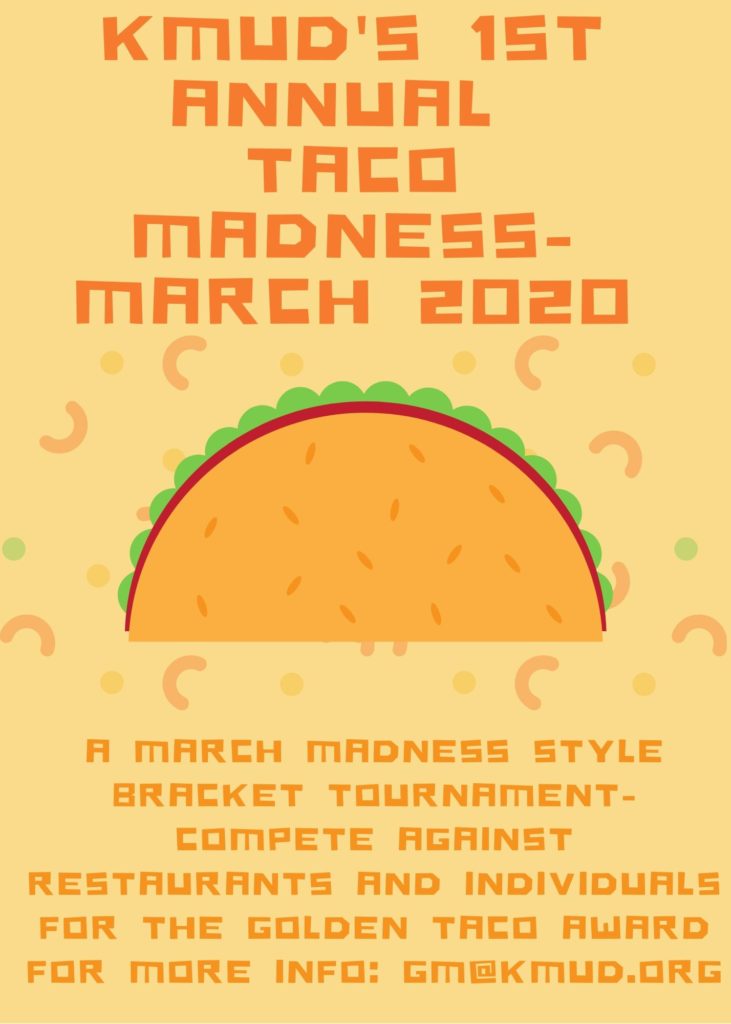 KMUD is hosting a bracket-style taco tournament next in March 2020. This event will be a humorous contrast to March Madness Basketball occurring at the same time. We are accepting 32 contestants (16 meat, and 16 veggie tacos) to participate in this on air and in person promotion. We would love for you to be one of them!

Here’s How it Works:

Taco entries will be randomly matched on the bracket with other tacos in their genre (meat or veggie). Each pairing will be given a date in March on which to bring 6 tacos to KMUD Studios in Redway. Tacos will be judged by staff and Programmers on site. If your tacos wins the match up, you will be given another date. This will continue until the FINAL FOUR FIESTA on April 3rd. If your taco makes it to the final four, you will be invited to our live event. 45-60 tacos will be needed for this event.

Here’s How the Promotion will benefit YOU:

All taco entries will be announced on air. Each time your taco wins a round, you will be announced again. The final four competitors will be added to our advertising for the Fiesta. The top winners in the meat and veggie categories will receive THE GOLDEN TACO Trophy and a laminated sign to be posted in your business proclaiming you the winner of KMUD’s first annual Golden Taco Awards.

Here’s How to Join:

Call Alyssa at 923 2513, or email [email protected]. Entries are due by February 21st. Please include your name and the type of taco that you will be making.

Posted in KMUD Blog
← You’re invited. Come for the information, stay for the party!March 2020 Board Meeting →