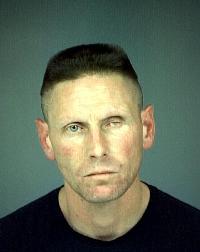 Hawkins was not located and remains outstanding, but the operation led to the seizure of approximately (15) pounds of processed marijuana, a hashish extraction laboratory, volatile chemicals used during the extraction process, 16.0 grams of cocaine, 7.0 grams of hashish, 5.8 grams of psilocybin mushrooms, a large quantity of Ecstasy tablets, scales, packaging material, (14) firearms, and a law enforcement style ballistic vest with trauma plate.  These items were located in a travel trailer occupied solely by Hawkins’ 16 year old son, whose name is not being released due to his young age.  Hawkins’ son and 18 year old Blaine Martin were arrested for a variety of criminal charges and were booked at the Humboldt County Juvenile Hall and the Humboldt County Correctional Facility.

“Deeply concerning is the fact that a 16 year old boy was in possession of such a quantity of drugs, multiple firearms – one of which was an assault weapon, and an extremely dangerous hash extraction lab”, stated HCDA Chief Investigator Mike Hislop.  “With the smallest spark or the presence of static electricity, the lab could have become an incinerator, killing or maiming those involved in the manufacturing process, and quite possibly – innocent persons living nearby”.

During the investigation, HCDA Investigators saw several vehicles occupied by what appeared to be high school age children arriving at the Hawkins’ residence.  Many stayed for a short period of time before leaving, a pattern that is indicative of illegal drug sales.  Based on the possibility that drugs were being sold to high school students, the HCDA’s Office forwarded the information to the Humboldt County Sheriff’s Department School Resource Officer for follow-up with school officials.

Anyone with information regarding the location of Sean Hawkins is urged to contact law enforcement.  Additionally, many of the firearms seized appear to be high quality collectibles, yet none return as being stolen in the Automated Firearm System.  Anyone missing firearms is urged to contact HCDA Investigator Wayne Cox at 707-268-2591.  Callers should be prepared to provide an accurate description of the missing firearm and serial numbers if available.