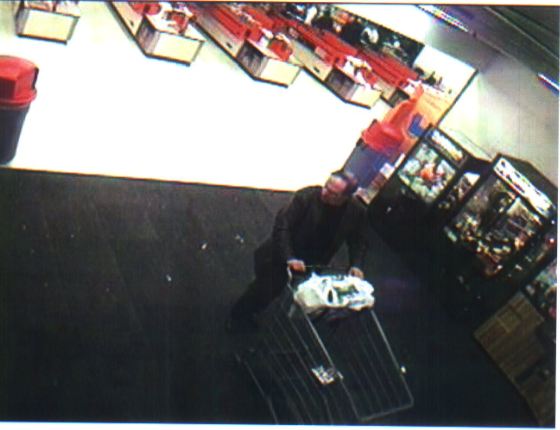 According to a News Release from the Eureka Police Department, received by KMUD News Oct 14, 2011:
The Eureka Police Criminal Investigative Services is requesting further information in regards to the murder of Reggie Clark.  On the night of his murder, Tuesday, October 4th, 2011, between 10:15 PM and about 10:35 PM, suspect Holly Grigsby stood by the main exit doors to Winco. Surveillance photos show Grigsby approached three men before approaching Reggie Clark.  Investigators would like to identify and interview these men. Attached are surveillance photographs of the three men. Grigsby is a small white female, 24 years old, with reddish tinted hair. At the time she was approaching customers exiting Winco, she was wearing dark pants and a dark hoodie with the hood up. Investigators are requesting, anyone with information in regards to the identity of the three males pictured in the surveillance photographs, please contact Detective Liles at 441-4032 or Senior Detective Ron Harpham at 441-305.
Click on the links below for previous KMUD News Posts for this case:
First KMUD Post
Second KMUD Post
Note: As an update to this story, according to an Associated Press 0n-line article, David "Joey" Pedersen, admitted to, "murdering a man in Eureka, Calif., on Oct. 3 or 4, the probable cause statement said. The crime matched an open investigation into the death of Reginald Alan Clark, 53, who was found dead with a bullet wound to the head.".  Read more…

Photos below, taken by the Eureka WinCo surveillance camera, show the three men who were approched by murder suspect Holly Grigsby.  Anyone with information about the identity of any of the three males pictured below is reguested to contact Detective Liles at 441-4032 or Senior Detective Ron Harpham at 441-305.