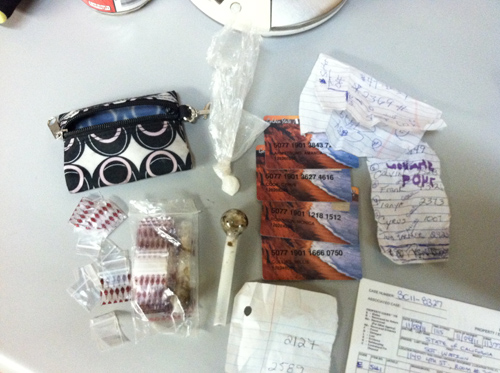 According to a Eureka Police Department Press Release,datedNov. 8, 2011:

On Nov. 8, 2011, at about 9:30 AM, investigators with the Eureka Police Department’s Problem Oriented Policing Unit (POP) conducted multiple probation searches at a motel on the 1100 block of 4th Street, Eureka.  This was in response to on-going, pervasive complaints POP had received about suspected drug activity occurring in several rooms there.
Investigators contacted Paul Ryan Bristow (AKA: Paul Coon, age 27 of Lodi) in one room.  Bristow was subsequently arrested after detectives found a zippered pouch on his person containing a small quantity of methamphetamine, Golden State Advantage EBT cards belonging to 4 other individuals (suspected to have been traded for drugs), dozens of small Ziploc baggies (drug sales packaging materials), and two meth pipes.
In another room, investigators discovered Tabitha Lyn MacDonald (age 26 of Eureka) hiding in the shower.  MacDonald was arrested after an officer saw her holding a small baggy of heroin and methamphetamine in her hand.  Two hypodermic syringes and another small baggy containing methamphetamine were also subsequently found in her purse.  Bristow was transported to the Humboldt County Jail where he was booked for possession of a controlled substance and drug paraphernalia. MacDonald was transported to the Humboldt County Jail where she was booked for possession of a controlled substance (two counts) and possession of hypodermic syringes.
Photos below show drugs /paraphernalia and suspects arrested, Bristow and MacDonald.