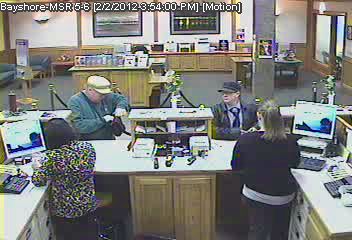 According to a press release from the Eureka Police Department, dated Feb. 2, 2012:
On Feb. 2, 2012, at about 3:53 pm, the Coast Central Credit Union at the Bayshore Mall was robbed.  The suspect approached the teller with a note advising the teller he was armed.  The exact words used by the suspect will be withheld from the public for investigative purposes. No weapon was seen. The clerk complied with his requests. The suspect fled north in the hallway towards Sears and then east through the exit hallway between Sears and the bank.

The suspect is described as a white male, about 30 years old, approximately 5’5”, 150 lbs clean shaven, medium length brown hair, with black rimmed, square glasses. The suspect wore a black ball cap, a black leather dress jacket, a bluish button up shirt, a black tie dark slacks and dark running shoes.  The Eureka Police Department’s Criminal Investigative Services is asking any citizen who either knows the suspect, saw the suspect at the mall, or has seen the suspect around town to contact Senior Detective Ron Harpham at 707-441-4305.

The photos below, from the bank’s surveillance camera, show the suspect (on the right with black cap ):