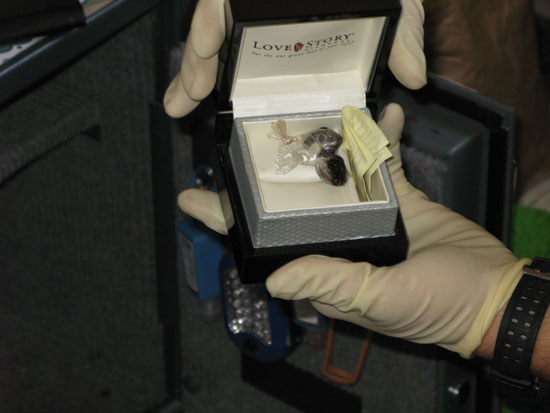 According to a Press Release from the Eureka Police Department, dated September 22, 2011:

On 9/21/11, at about 2:22 PM, investigators with the Eureka Police Department’s Problem Oriented Policing Unit executed a search warrant at a residence on the 2600 block of Union Street, Eureka.   The warrant was obtained after the POP Unit developed information residents there were selling heroin from the property. During a search of the residence, investigators located and seized approximately ½ ounce of tar heroin, over $4,700.00 cash (suspected illicit drug sales proceeds), digital gram scales, drug sales packaging materials, and a stolen .40 caliber Springfield Armory XD semi-automatic handgun with ammunition.  The handgun had been reported stolen during a recent residential burglary in Eureka.
Residents Derick Johnathan McElroy (22 of Eureka) and Ashley Rose Stogner (22 of Eureka) were arrested and transported to the Humboldt County Correctional Facility where they were booked for possession of heroin for sale and possession of stolen property.
Anyone with information concerning suspected drug sales activity occurring in Eureka is encouraged to call the Problem Oriented Policing Unit at (707) 441-4373 or the Humboldt County Drug Task Force at (707) 444-8095.