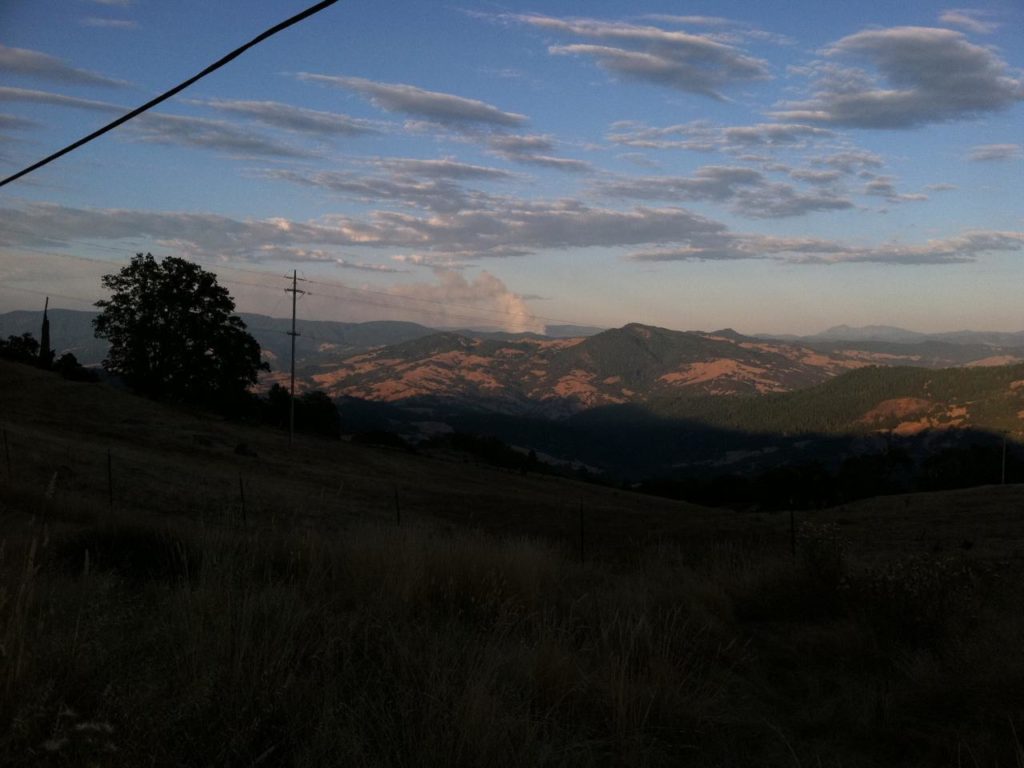 According to a news release from the U.S. Forest Service, dated 9/23/11:
The Ruth Fire, started near the Ruth Guard Station, Trinity County Road 501, at about noon Friday, Sept. 23, 2011 and required the evacuation of approximately 50 residents in the general Ruth area by the Trinity County Sheriff’s office and California Highway Patrol.  The evacuation is still in effect as of this release.  The fire is believed to have burned three structures; one was a residence and the other two are outbuildings.  About 400 acres have burned to date. Located within the Mad River Ranger District, the fire started in grass and brush and has moved into steep, rugged forested terrain.  Priorities for suppression are to protect structures and private property in the community of Ruth; reduce impacts to recreational use of Ruth Lake and surrounding forest areas during a high visitor use period (hunting season); and protect critical wildlife habitat in the Johnson Glades area.  A Six Rivers National Forest (NF) local fire team is on site. There are multiple crews from the following agencies, Six Rivers and Shasta-Trinity NFs and CalFire.  Equipment includes helicopters, air attack, water tenders and dozers.  A California interagency team, NorCal 1, has been ordered and will assume command Saturday.
The Ruth area is without power due to burned power lines; no time of restoration is available.  There are no forest closures at this time. Residents and travelers should be aware that there will be emergency vehicles on the highway and county roads and should proceed cautiously along area roads.  It will be smoky, so people with health concerns should stay indoors.  The cause of the fire is under investigation.
Additional photos and information can be viewed on the Ruth Lake Facebook Page at: http://www.facebook.com/pages/Ruth-Lake-Ruth-CA/122473894450340?sk=wall

Photo of Ruth Fire as seen from Alderpoint, taken by an Alderpoint resident