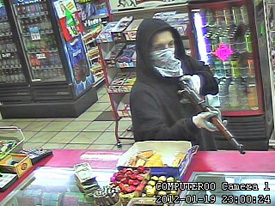 According to a press release from the Eureka Police Department, dated Jan. 31, 2012:

The Eureka Police Department’s Criminal Investigative Services, are investigating a pair of armed robberies, that appear to have been committed by the same person.  Eureka Police Department Detectives are looking for citizen’s assistance identifying the suspect.  Both armed robberies occurred at Stop and Shop in Eureka. The first armed robbery occurred on August 27th, 2011 at about 9:47 PM.  The suspect brandished a handgun at the clerk. The second armed robbery occurred on January 19th, 2012, at about 9:57 am. The suspect brandished a rifle at the clerk.

Anyone with information about the two robberies should contact Senior Detective Ron Harpham: 707-441-4305  [email protected]

The photos below were taken from the two surveillance videos: