The Coast Guard's new Rescue 21 tower in Shelter Cove was vandalized by multiple gun shots with a high powered rifle in the early morning hours of June 23.  The crime was first noticed by contractors when they arrived at the site this morning.  A preliminary assessment estimates more than $100,000 of damage was caused to structures and radio equipment for US Coast Guard, Humboldt County Sherriff, California Highway Patrol, Cal Fire/Fortuna, Shelter Cove Fire, District utility, 101Netlink wireless internet, CRE power page, KMUD radio, TV stations 3,6 & 13 and Verizon.  Not all systems were disabled but damage assessments are not complete.  More than 25 empty high power rifle casings were found around the site and bullet holes were found in nearly every structure on the site.  The shooter also pumped three rounds into the job site portable toilet, multiple rounds into the tower contractor's equipment trailers, flattening three tires. A 200 gallon propane tank was also shot but not damaged. 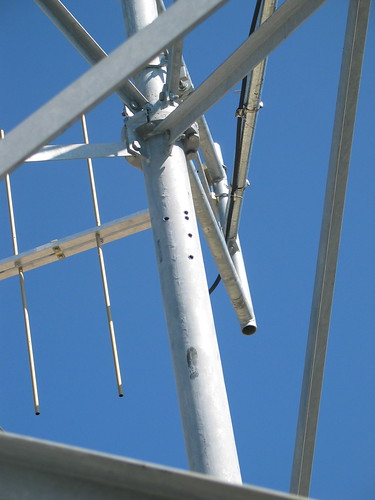 The Humboldt County Sherriff's Department investigated the scene and collected evidence late this morning (June 23).  Deputy Allen Stockton is handling the case but indicated that the FBI will likely take charge of the case since this is a federal project.

Residents near the tower site reported later in the day that they had heard multiple gun shots in the area between 1 and 2 AM on the morning of June 23rd.

Anyone with information about this incident should contact the Humboldt County Sherriff's office.

The Rescue 21 construction photo web page with images of the damage:  http://www.sheltercove-ca.gov/tower/tower.htm

Redwood Community Radio owns and operates a translator at that communications site. The translator receives KMUD's 91.1 signal from Pratt Mountain and retransmits on 99.5 FM, serving the Shelter Cove area. KMUD equipment was not damaged in this attack, but as you can see in one of the photos, one of the bullet holes was within a couple of inches. The antennas for the translator have not yet been installed on the new tower but are expected to be moved very soon. KMUD staff urge anyone with information about the vandalism to contact the Humboldt County Sheriff's office at (707) 923-2761 (Garberville) or the main Eureka office (707) 445-7251.

Find out more about the U.S. Coast Guard's Rescue 21 project.